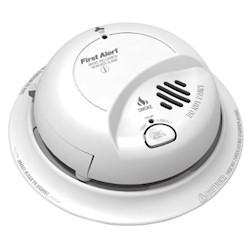 Smoke detectors and smoke alarms are proven life savers. There are more than 300,000 residential fires every year. When there are functional smoke alarms in the house, families gain valuable time to escape.The US Consumer Product Safety Commission (CPSC) reports that fire is the second leading cause of unintentional death in the home. Each year, more than 3,700 people die in residential fires, and there are more than 400,000 residential fires serious enough to be called into fire departments. About 90 percent of U.S. households have smoke detectors installed. However, a CPSC survey found that the smoke detectors in 20 percent of those households – about 16 million – were not working, mostly because the battery was dead or missing. Approximately two-thirds of reported home fire related deaths between 2003 and 2006 occurred in homes with no working smoke alarms. Having properly installed and maintained smoke alarms can mean the difference between property damage and devastating loss of life in a residential fire.

A smoke detector is a device which senses smoke in the air, typically associated with a fire, and sends out an alarm warning. Residential smoke detectors can be a stand-alone smoke alarm, interconnected with other smoke alarms throughout the home or connected to the house alarm system which may include offsite monitoring.

The two most common types of residential smoke alarm detectors are ionization and photoelectric. Each of which has its advantages and disadvantages. Some models employ dual sensors to capitalize on the advantages of both technologies.

Ionization type smoke detectors are typically more responsive to flaming type fires which produce smaller particles in greater amounts. Ionization type smoke alarms have a small amount of radioactive material (Americium) between two electrically charged plates, which will ionize the air and causes current to flow between the plates. When smoke enters the chamber, it reduces the flow of current and activates the alarm.

Home fires can be smoldering, slow starting fires, such as many electrical fires or hot flaming type, such as a space heater catching a curtain on fire. It is impossible to determine which type of fire you might experience. Given that each alarm type has an advantage at detecting a specific type of fire, for the best overall protection, we recommended both detector technologies (ionization and photoelectric) be used in the home. This can be achieved through the use of individual ionization and photoelectric alarms or dual technology alarms that combine both technologies in a single device. Some alarms also include carbon monoxide sensors, providing additional protection.

Hard-wired smoke alarms operate on your 120v household electrical system. They can be stand-alone or interconnected so that every alarm sounds together, giving all occupants of the home an early warning, regardless of what part of the home a fire occurs.  Hard wired alarms should also have battery backup.

The number and location of smoke alarms are also important to provide maximum safety to home occupants. The National Fire Protection Association (NFPA) has established guidelines for smoke alarm placement. These are requirements for new homes but should be considered as a safety upgrade for older homes as, well. 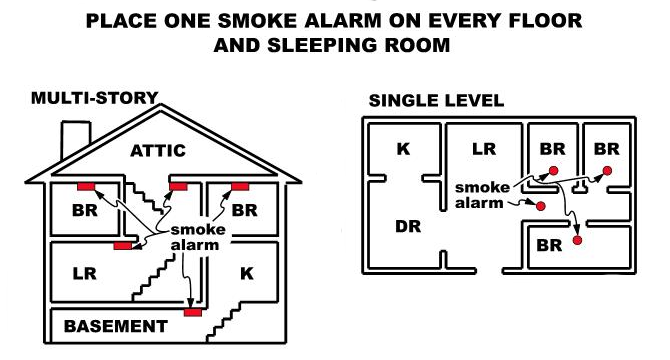 Ensure that your smoke alarms are providing your family the protection that they need by regularly performing a few simple maintenance activities.

Test all of your smoke alarms using the method defined by the manufacturer. Reference your owners’ manual or download it from their website for specifics;

Do this at the spring and fall daylight savings time changeover

There are now wireless alarms which enable older homes to have an interconnected alarm system, without the expense of having to wire the house.

Many newer homes have family rooms that are open to the second story. Smoke alarms in these rooms are often mounted where they are virtually inaccessible without a tall ladder or lift (remember that the alarm needs to be within 12 inches of the ceiling). These units almost never get regular battery changes or tested because the owner cannot safely reach them. This can be addressed with a new breed of smoke alarms which have long life (up to 10 years) batteries and can be tested with a TV remote control. Some also have indicator lights so that you can see that the unit is operating. If you are buying a new home with a high ceiling mounted alarm, you should insist that one of these units be installed.

Alarms are available with bright strobe visual indicators for homes that have hearing impaired persons.

Don’t forget that your family home safety plan should also include carbon monoxide alarms, fire extinguishers and a family escape plan. We’ll cover these topics in other articles.

Additional information may be found at these and many other online resources.

Chuck Evans is a Texas Licensed Professional Inspector (7657), Certified Master Inspector and Level-III Thermographer. He has been performing Home Inspections in the greater Houston area since 2004.